Western Animation / My Goldfish is Evil 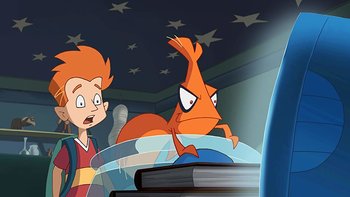 Another week, another evil scheme for Beanie to foil.
Advertisement:

My Goldfish is Evil is an extremely obscure Canadian animated series created by Nicolas J. Boisvert and produced by the Montreal-based animation studio Sardine Productions (later known for ToonMarty and the Chop Chop Ninja franchise) for CBC Television and Télévision de Radio-Canada. It ran for 2 seasons for a total of 26 episodes from 2006-2008.

11-year-old Beanie is just your average kid, except for one thing - his pet goldfish, Admiral Bubbles, is in fact a highly intelligent and utterly megalomaniacal criminal mastermind bent on spreading terror throughout the city and taking over the world! As absurd as this sounds to even Beanie's own mother, Beanie knows all too well that Admiral Bubbles is capable of building all manner of diabolical weaponry and gadgetry out of everyday devices in order to fulfill his dreams of power and conquest. Not content with remaining in his owner's fishbowl, Admiral Bubbles sneaks out every week with a new plan for global domination in mind. Knowing that he's the sole thing standing between Admiral Bubbles and his goals, Beanie is the only one able to face Admiral Bubbles and foil his plans - something that villainous little fishie knows all too well himself.

Will Admiral Bubbles succeed in his evil plans? Will young Beanie manage to stay one step ahead of him? The future of the planet depends on the answer!