Needle in a Stack of Needles 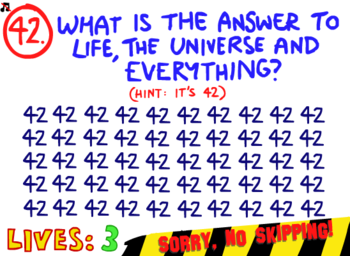 It's sometimes said the best place to hide something is in plain sight. But suppose that logic won't work — the object you're trying to hide happens to be something that would stand out no matter where you put it. How do you hide such a thing?

Why, by making about a thousand duplicates and hiding it amongst them! It'll be nigh-impossible for future treasure hunters to figure out which is the right one. They don't have to be exact copies, either: So long as there are too many to go through, the object is completely safe.

This kind of challenge is set up so characters can demonstrate their intellect rather than physical prowess. Figuring out the clue to deduce which is the real MacGuffin may be a Secret Test of Character. Or perhaps a test of lateral thinking - there is often a way to Cut The Knot.

A variation on Hidden in Plain Sight. Doppelgänger Spin is this tactic applied to battle. For hiding people, the equivalents are Lost in a Crowd, I Am Spartacus or the Ringer Ploy. Shell Game is when a stack of needles is made while a witness watches. Pixel Hunt is the video game equivalent. Serial Killings, Specific Target is when the 'needle' that's being hidden is a specific murder amongst what appears to be the work of a serial killer. Decoy Convoy is when the "needle" is hidden in separate transports.