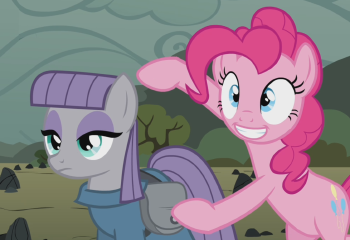 These sisters have a rock-solid relationship.
Pinkie Pie: I just know that my best Ponyville friends and my best sister friend are gonna become bestest friends!
Written by Noelle Benvenuti
Advertisement:

The Mane Six have been summoned to Sugarcube Corner, very early in the morning, by an anxious Pinkie Pie, who wants them ready for a long session of rock candy testing. As they recover from the sugar overload, she explains that her older sister Maud is coming to spend a week in Ponyville before she leaves for school (she's working on her "rocktorate"), and that it is their tradition to exchange candy necklaces to celebrate their bond. Pinkie plays up Maud's good qualities, hoping that her best friends in Ponyville will become equally close to her favorite sister. Unfortunately, when Maud Pie joins them for an afternoon picnic, they find her to be quiet, reserved, and interested only in rocks. Pinkie obliviously chatters about how much fun it will be when all of them get together to make the candy necklaces, while the Mane Five wonder what to make of Maud's chilly demeanor.

Each of the five attempts to bond with Maud over their shared interests: Rarity tries to design her a dress, Fluttershy shows her forest animals, Twilight looks up poetry, Applejack makes some apple cider, and Rainbow Dash challenges Maud to a rock-throwing contest. In every instance, Maud's cool and excessively literal-minded reactions stymie them. The Mane Five are forced to admit that they just don't feel any sort of connection to Maud at all, and they reluctantly inform Pinkie that they wouldn't feel right making best friend necklaces with someone who isn't their friend. Pinkie accepts this with obvious disappointment.

Pinkie decides to find something all of them can enjoy together. She assembles her sister and friends in front of an obstacle course designed for everypony's interests, including a huge rock slide for Maud with a giant boulder at the top. Pinkie races through it to demonstrate, only to get her hoof caught in the rock slide. As she tries to pull free, the boulder comes loose and tumbles down on Pinkie. Maud abruptly comes alive. She dives through the course, crushes the boulder to rubble under her hooves, and escorts Pinkie safely back to earth. The Mane Five are beyond relieved to see her safe, but Maud tells Pinkie that she's decided to cut her trip short and spend the rest of her vacation at the Pie family rock farm. Pinkie races after her. It's then that Twilight realizes that the Mane Five and Maud do have something in common: their love for Pinkie.

Maud and Pinkie return to the rock farm, where they find their friends waiting for them with enormous sacks of rock candy. Both sides apologize for trying to force a friendship, and Twilight explains that they should have just bonded over their shared affection for Pinkie Pie. Later, when Maud is boarding her train for school, everypony gives her a rock candy necklace and bids her goodbye. Pinkie immediately starts eating hers, but Maud quietly reveals to Twilight that she's never eaten any of her own. As she puts her newest necklace into a little box with all the others, she explains that she doesn't really like candy — but she does love Pinkie Pie, finally breaking into a warm smile.