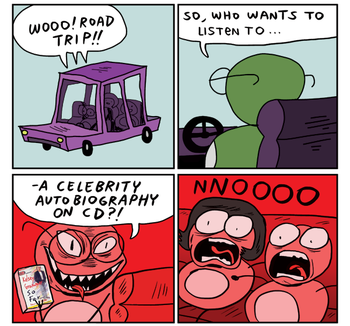 Spoony: Can't we come up with something new and original for an evil computer to do other than launch nukes and crash the stock market? Something legitimately scary? Guys, please, I'm begging ya'.
Professor Roswell: He could make... Gary Coleman President.
Spoony: AHHHHHH! OH, MY GOD! RUN! PANIC! EVERY MAN FOR HIMSELF! GOOOOOO!
— The Spoony Experiment reviewing

the film Game Over: Control-Alt-Death
Advertisement:

A comedy trope where something is played up to be terrifying, and it clearly is not. It's not even something that sets off a common phobia. Sometimes the scene is shot like a horror film. Bonus points if the "Psycho" Strings are playing.

Advertisements can do this, to show how either not using the product or using a rival product can be horrific. This trope can also be used to emphasize how disgusting a school lunch is.

Often a Caustic Critic will do this with finding out he has to review some works he really hates, as a way to show that Suckiness Is Painful. Sometimes, even just holding the work in hand is enough to cause emotional scars. Often happens when a character has an Irritation Nightmare, too.

A Super-Trope to Place Worse Than Death.

Contrast Accidental Nightmare Fuel and Fridge Horror (portrayed as not scary, but ends up being so). Compare and Contrast Mundane Horror.

(Animation by Pixelrush) You'd think an acrobatic warrior princess would be accustomed to high places.

Alternative Title(s): Fauxriffic, What Do You Mean Its Not Horrific

(Animation by Pixelrush) You'd think an acrobatic warrior princess would be accustomed to high places.