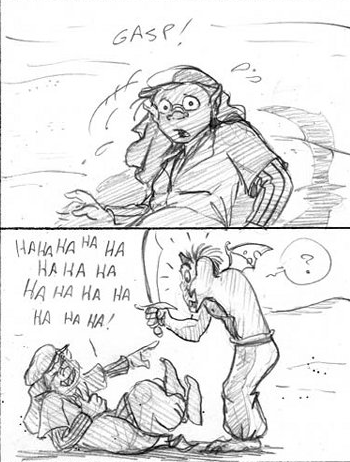 Did you trade your left half for that sword?!
"Tell that big dumb scary face to take a hike and leave you alone and if he thinks he can scare you then he's got another thing coming and the very idea of such a thing just makes you wanna HAHAHAHA-, heh LAAAAAAAUUUGH!"
— Pinkie Pie, My Little Pony: Friendship Is Magic, "Friendship Is Magic, Part 2"
Advertisement:

The heroes are walking through the dark catacombs. Is that heavy breathing? No, not wanting to imagine what could be so loathsome as to live in such a place, they dismiss it as the wind. They press on, then suddenly something terrible leaps out of the shadows and... the heroes burst into laughter.

Whether it's the Caustic Critic harping on the quality of the game's monsters, or the actual characters within a story, this trope applies any time monsters are being ridiculed. Killer Whatevers, Slurpasaurs and monsters that have suffered from a Special Effect Failure are particularly prone to being mocked.

If the monster looks stupid but the characters treat it as if it were terrifying, that's not this trope.

See also: Our Monsters Are Different, Monster Mash, Everything Trying to Kill You, Do Not Taunt Cthulhu, Monster of the Week.

Has nothing whatsoever to do with He Who Fights Monsters, Talking the Monster to Death, Mugging the Monster, or Bullying a Dragon. Although the last two might well result in a Curb-Stomp Battle.