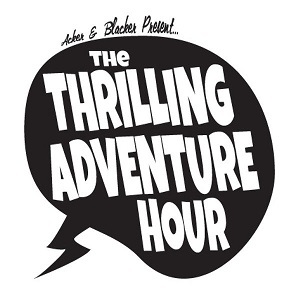 (originally "The Thrilling Adventure and Supernatural Suspense Hour") is a live audio theater production in the style of old time radio. The show has run monthly since 2005, when it was performed at M Bar in Hollywood until 2010, after which the production was moved to the Largo, a theater also in Hollywood. Starting in 2011, past segments were distributed as a podcast (except for the M Bar versions, which have not been made available to the public). In 2015, the monthly live shows were closed and the podcasts ended, though the makers of the show have also made a live show DVD and a number of graphic novels based on the podcast, including an anthology published by Archaia and two limited series published by Image Comics. However, in 2016, some podcast episodes of the live shows were released continuing the series after the Series Fauxnale of some of the segments. New studio-recorded content and some previously unreleased material were released starting in October 2018, released under the new title: The Thrilling Adventure Hour Treasury

Limited run segments and specials include:

The show also features Product Placement for the fictional Patriot Cigarettes ("they're good for your constitution!") and non-fictional

In autumn 2012, the show raised money on Kickstarter to make a comic book adaptation and a concert movie.

Had a crossover episode with Welcome to Night Vale at SDCC 2014!