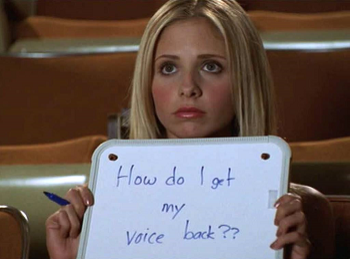 "A turkey call?! You lost your voice to a turkey call?!"
— Rarity (referring to Big Mac), My Little Pony: Friendship Is Magic, "Filli Vanilli"
Advertisement:

Losing one's voice is what happens when someone's vocal cords are affected so that their throat feels sore and they either cannot talk or have difficulty talking.note This can also be achieved with magic; while characters who wind up losing their voices due to magical means usually don't suffer any associated throat pain, certain malicious spellcasters have been known to make exceptions to this rule.

In fiction, sometimes whole plots (often episodes of TV shows and short stories, since you can't generally fit this into a whole movie), focus on someone losing their voice.

This could be a subtrope of Sick Episode if their reason for losing the voice is due to a disease, but sometimes, they're not sick, they just lost their voice due to straining it (often due to singing or shouting).

The plot might resolve on trying to get the voice back in time for an occasion that requires talking (like if they have to sing or do a speech, or if their powers require voice activation), and if they fail, they might end up with another character lip-synching them. Other times, the plot might revolve around trying to find ways to communicate with the lost voice.

Often the character will find out they've lost their voice when they try to speak and the sore throat comes on later.

The beginning of the episode "A Magical Voice" shows that Matthew has lost his voice, and he explains it to Soo via a pen and paper.

The beginning of the episode "A Magical Voice" shows that Matthew has lost his voice, and he explains it to Soo via a pen and paper.