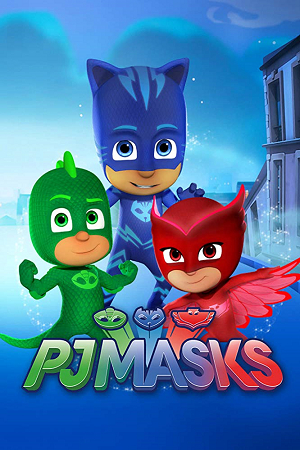 L - R: Gekko, Catboy, and Owlette.
PJ Masks, we're on our way!
Into the night to save the day!
Advertisement:

PJ Masks is a Disney Junior cartoon that premiered on September 18, 2015. It is based on Les Pyjamasques, a series of French picture books created by Romuald Racioppo.

By day, they are Connor, Greg and Amaya, three regular kids. But by night, they are Catboy, Gekko and Owlette, the PJ Masks, who protect their home town from the antics of the nighttime villains Romeo, Luna Girl, and Night Ninja.

"TV Tropes, all shout hooray! Because in the night, we trope the day!":

PJ Masks, all shout hooray!
'Cause in the night we saved the day!
Feedback