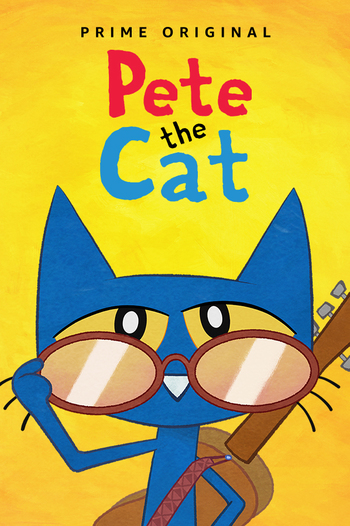 He's one Cool Cat.
"Pete the cat
He's one groovy dude
He'll put you in
A happy mood!
He's got a funky style
And a cool attitude
Pete the cat
Yeah, he's all that
He knows where it's at
Pete the cat."
Theme song by Elvis Costello

Hey there, cats n' kittens. It's me, Neville, and today I'm gonna give you a groovy description of Pete The Cat.

The animated musical series shows Pete's daily adventures as he learns new things and helps out his friends and family. Rounding out the cast are his mother and father, his older brother Bob, and his many friends, including aspiring rock star Callie Cat, artistic French-Canadian pug Emma, Cloud Cuckoolander Sally Squirrel, the appropriately-named Grumpy Toad and the new kid, Gustavo the platypus.

Not to be confused with that animated cat named Pete.

"Well, that's all for now, cats and kittens."