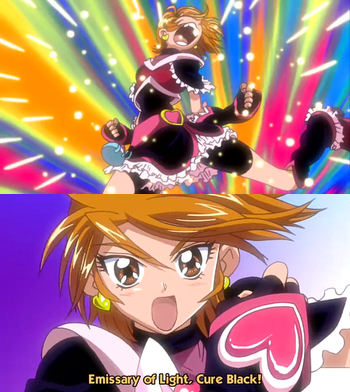 So standard, even tomboyish Magical Girls have to comply.
Ben: [transforming into Swampfire] SWAMPFIRE!
Gwen: Ben, that's overkill.
Swampfire: No, it's Swampfire. I don't have an alien named "Overkill." 'Cause if I did, I'd, y'know, shout "OVERKILL!"
— Ben 10: Ultimate Alien, "Prisoner Number 775 Is Missing"
Advertisement:

What's the most stylish way to end a Transformation Sequence, a shapeshift, or a mode change? For some heroes, it's simply to shout the name of their new form right as the Stock Footage ends. Very much standard operation procedure for Humongous Mecha of the transforming or combining variety, Magical Girls with long, sparkly transformations, and any Tokusatsu hero worth their salt.

Alternatively, the name of the form can be the activation word for the transformation, or at least part of it. Again, Super Robots do this often, simply because it's easy to Hand Wave or at least poke fun at it, and because it's style. For another variation, the hero himself needn't announce his form change, but his commander, his spotter, or a piece of machinery can do it for him.

You may notice that this trope springs up the most in Merchandise-Driven shows, or programs that just generally have an associated toyline; this isn't an accident. After all, what better way to get young kids to remember what toys to ask their parents for other than having the show's characters outright shout it at them?

Compare Calling Your Attacks, By the Power of Grayskull!, Invocation and In the Name of the Moon. May be part of Transformation Sequence, Shapeshifting and/or Super Mode. In some cases, comes with a side of Hot Blood.

Alternative Title(s): I Am Hero Hear Me Roar