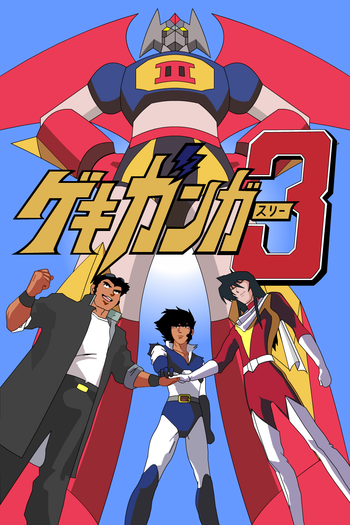 A Show Within a Show to Martian Successor Nadesico, Gekiganger 3 is an affectionate pastiche of Super Robot anime of the 1970s and 1980s. An OVA was released in 1998 which compiled all the Gekiganger 3 clips seen in Nadesico in chronological order and included a Short Film.

The ancient Super-Paleolithic people predicted that the alien Kyo'akk empire would invade the planet and left behind plans for a Super Robot, Gekiganger III, to stop them. Professor Kokubunji builds it, and Hot-Blooded pilots Ken Tenku, Joe Umitsubame, and Akira Daichi take it into battle against the mecha monsters of Prince Akara and his overlord, Emperor Hyperion. Midway through the series, Joe is killed and the Gekiganger III is destroyed only to be replaced with Gekiganger V and new pilot Tetsuya Ryuuzaki.

Sounds exactly like every other Super Robot series out there, right? Good, that's the point.

The OVA movie, Gekiganger 3: Hot-Blooded Great Battle (with the Framing Device of the Nadesico cast seeing the movie in a theater) features the return of the Super-Paleolithic people, who attack both the humans and the Kyo'akks in an attempt to reclaim the world. Akara must temporarily join forces with the Gekiganger team to stop them.

Title completeness aside, not to be confused with Juken Sentai Gekiranger.

This Show Within a Show includes examples of:

Anime series that receive a Shout-Out in Gekiganger 3 include: