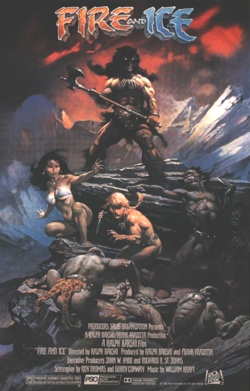 Fire and Ice is a 1983 animated Heroic Fantasy film.

From their stronghold in Icepeak, the evil Queen Juliana and her son Nekron send forth a wave of glaciers, forcing humanity to retreat south towards the equator. Nekron sends a delegation to King Jarol in Firekeep to request his surrender, but this is really a ruse for Nekron's sub-humans to kidnap Jarol's daughter, the Princess Teegra. But Teegra makes an escape and comes upon Larn, the only survivor of a village razed by glaciers, who offers to escort her back to Firekeep. As Teegra is recaptured, Larn teams with the mysterious Darkwolf to save Teegra and then travel to Icepeak to stop Juliana and Nekron.

This animated movie was neither financially nor critically successful, but later became a cult classic among fans of the film's two creators, Ralph Bakshi and Frank Frazetta. Robert Rodriguez has begun work on a live-action adaptation, which was picked up by Sony Pictures, but there have been no new developments in years so it seems like the remake is trapped in Development Hell.

Not to be confused with the game, the ski movie by Willy Bogner with the same name, or the second Warrior Cats book.

Fire and Ice provides examples of: