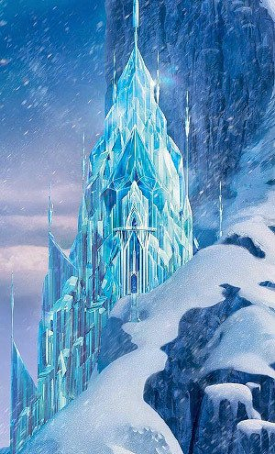 The cold better not bother you if you live here.
The Castle of Bones loomed over her now. It certainly deserved the capital letters, up this close... The pillars at the entrance were hundreds of feet high. Each of the steps leading up was taller than a man. They were the grey-green of old ice. Ice. Not bone. There were faintly familiar shapes to the pillars, possibly a suggestion of femur or skull, but it was made of ice.
— Hogfather
Advertisement:

At cold enough temperatures, ice can be a suitable building material, but why stop at a simple igloo? Enter the ice palace, if you can stand the cold.

The ice palace tends to be a castle-sized and shaped piece of an ice world. It may belong to a larger ice world, or it may be relatively self-contained...

It's a huge, foreboding building that seems as if it was once inhabited by normal people. However, it has now frozen over, and any people who currently live there are definitely not normal.

If it's a level in a Video Game, it's a type of Slippy-Slidey Ice World. Ice palaces tend to turn up in the mid-to-late story or videogame because of their nature. Expect any boss who lives there to be An Ice Person. Snowlems might also be found living here. Also expect icicles (possibly crashing down at the worst time), the occasional floor that's too slippery to walk on, and —if it's a videogame — Block Puzzles and various Malevolent Architecture.

A brick-and-mortar dungeon that's entirely underground counts as an Ice Palace if it is otherwise cold enough. But an ice palace has to be more, um, palatial than an icy cave.

May even be ruled by a Winter Royal Lady, or a literal Ice Queen, or Santa Claus.

The Admin created a beautiful and deadly ice palace to test Jesse. Stella gets interested because of the power used to create it.

The Admin created a beautiful and deadly ice palace to test Jesse. Stella gets interested because of the power used to create it.