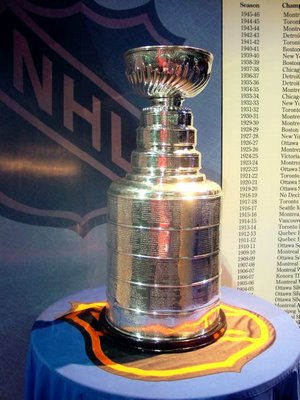 The Stanley Cup (French: La Coupe Stanley) is the trophy awarded to the winning team of the National Hockey League's end-of-season playoffs. Hockey fans are known to proudly call it the hardest trophy to win in professional sports. While that claim is difficult to prove scientifically, given that the winning team generally has to play at least 98 hockey games (82 regular season and a minimum of 16 post-season games, assuming a full post-season sweep - which is not only highly unlikely but also unprecedented), it's certainly not an easy trophy to win.

The Cup itself is named for Lord Frederick Stanley (later the 16th Earl of Derby), the Governor-General of Canada who was instrumental in organizing Canadian hockey and donated the original Cup in 1892. Originally a silver punch bowl made in Sheffield and purchased for ten guineas (on the order of $1200-$1300 in today's dollars), the trophy has been through a lot of incredible stories, especially for a trophy.note (Some of these stories apply to the original, others apply to the newer one, and others to both.) This is in no large part due to the unofficial tradition of each member of the winning team getting a day to spend with the trophy (most will simply take it to their hometown for photo-ops at local schools). It's shared a bed with countless players, been set on fire, gone clubbing with Mark Messier, been used to baptize infants, attended pool parties with the winning team (the trophy, it turns out, does not float), marched in a gay pride parade, been driven around at 200mph by Mario Andretti on the eve of the Indy 500, and been lost on the side of the road. It was also attacked by Taliban grenades in 2007 while visiting Canadian soldiers in Afghanistan. The damage it's sustained is fairly significant; multiple dings and dents from being kicked into a frozen river, bar-hopping with players, and incidents players are presumably too embarrassed to discuss with the press.

Of note is, unlike other major sports trophies where a single trophy is given to the winning team permanently to flaunt around and display (good examples are the Lombardi Trophy of the Super Bowl and the Larry O'Brien Trophy of the NBA), there is only one Stanley Cup. Okay, technically there's three of them (see below), but the authenticated trophy is one-of-a-kind, passed down from champion to champion of each season (and gets bigger in the process, at least until 1991). While the Cup usually remains at the Hockey Hall of Fame unless it is being used for promotional purposes, it is handed to the winners at the deciding game.

Which, of course, leads to the question, "If there is only one single trophy, what happens when they run out of space on the Cup to engrave names?" Well, since 1991, when the size of the Cup was finally capped, each time the Cup runs out of space (once each 13 years or so), the top ring is removed, the ones underneath are moved up, and a new ring is added to the bottom. The removed ring is then stored in the Hockey Hall of Fame. The NHL takes the immortality of its winners very seriously.

The Colorado Avalanche are the current Stanley Cup champions, winning it in 2022 for the third time in franchise history.