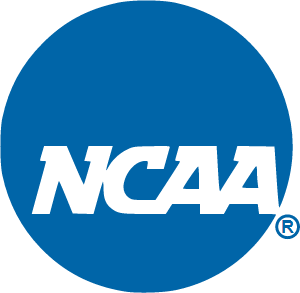 The NCAA, or the National Collegiate Athletic Association, is the primary organization for college level athletics in the United States. Founded in 1906 as a result of a plea by President Theodore Roosevelt to reform college football as the Intercollegiate Athletic Association of the United States, the organization now organizes and regulates events, scholarships, and recruiting in a number of sports in the US (as well as Simon Fraser University in Burnaby, BC, Canada) at all levels.

Sports Officially Sanctioned by the NCAA

An aside on scholarships in cross country and track: While the NCAA considers cross country, indoor track, and outdoor track to be separate sports, it combines all three for purposes of scholarship limits in Divisions I and II. In other words, schools are limited to a certain number of scholarships for track and cross country combined.note The NCAA has a separate limit for schools that sponsor neither form of track for a given sex, but do sponsor cross country for that sex.

But Wait, There's More! In addition to these, the NCAA also recognizes certain sports as "emerging sports" for women. Unlike the sports listed above, these do not have NCAA-organized championship events. (They do have championship events run by other bodies.)

Each sport is subdivided into "Divisions" which denote level of play. The number of divisions and qualifications for them differ from sport to sport. See the page on the NCAA

on The Other Wiki for more details. The basic divisions are: The NCAA first split into divisions for both legislative and competitive purposes in 1956, with the most competitive programs placed in the University Division and the rest of the membership placed in the College Division. The current three-division setup, with divisions designated by Roman numerals, was created in 1973. The University Division was renamed Division I; the College Division was split, with schools wishing to continue awarding athletic scholarships (or compete alongside those that did) placed in Division II and those wishing a non-scholarship environment placed in Division III.

Aside from the divisional structure, NCAA teams are, in the vast majority of cases, members of athletic conferences. These conferences often act as member leagues of the NCAA, and usually organize their own meetings and tournaments, as well as their own rules for member schools. While there are a few schools that remain independent, the vast majority of schools join due to the added benefits (scheduling, scholarships, postseason and tournament play) that conferences bring. Additionally, for these reasons it is not uncommon for a school to be a member of a conference for one sport, but a member of a different one for another. This most often happens for one of two reasons, which sometimes overlap:

Another structural note involves scholarships. As noted above, the key distinction between Division III and the other divisions is the prohibition of athletic scholarships. Not only that, D-III schools are not allowed to maintain endowments to support athletics, cannot use athletic ability as a criterion to award any form of financial aid, and are routinely monitored by the NCAA to ensure that the proportion of financial aid awarded to varsity athletes is closely proportional to their share of the student body.note The two D-III service academies, Coast Guard and Merchant Marine, do not violate the scholarship ban because all students receive federally-funded full scholarships whether or not they play on a varsity team.

In the two higher divisions, each school is limited as to the number of scholarships it can award in each of its sports. Division I sports are divided into "head-count" and "equivalency" sports:

In sports that do not have separate national championships for D-II or D-III, lower-division schools are allowed to compete alongside D-I members. D-II members may operate under D-I rules and scholarship limits in those sports. The sport most notably affected by this rule is ice hockey; the NCAA has never had a D-II women's championship in that sport, and abolished its D-II men's championship in the late '90s. While the NCAA previously allowed D-II schools to compete in D-I in sports other than football and basketball, even if D-II championships were available, it shut off that ability in 2011, though a grandfather clause allows a few D-II schools to "play up" despite the existence of D-II championships to this day.

Another grandfather clause, dating from 2004, allows an even smaller number of D-III schools to compete as D-I members with scholarships in one men's sport and one women's sport. The most notable examples of programs covered by this clause are Johns Hopkins men's lacrosse and Colorado College men's ice hockey.note The schools covered by this particular grandfather clause had competed at the highest level in a specific sport before the NCAA's first divisional split in 1956, long before women's sports were under NCAA authority. These schools were later allowed to add a scholarship women's team, presumably due to Title IX (i.e., a federal law prohibiting sex discrimination in higher education).