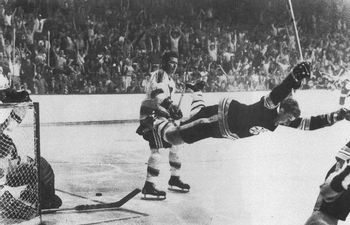 Bobby Orr doing his Superman thing after scoring The Stanley Cup winning goal for the 1970 Boston Bruins.
"Hello Canada and hockey fans in The United States and Newfoundland..." note Note that this is not a My Friends... and Zoidberg joke, but rather during Hewitt's heyday, Newfoundland was a quasi-independent country; it didn't become a Canadian province until 1949.
— Foster Hewitt's traditional opening lines for Hockey Night in Canada.
Advertisement:

Ice hockey, or sometimes just simply hockey note Note that in most countries outside North America, "hockey" refers to field hockey and "ice hockey" refers to ice hockey, is to Canada, most of the United States, and much of northern Europe what Major League Baseball and the National Basketball Association and National Football League are to the rest of the United States and Association Football is to the rest of the world. It is an obsession, a religion that unifies Canadians of every race and colour. It is also Canada's official national winter sport.note Lacrosse, a native American game that's very similar to hockey — including the reputation for brutality — but without the ice, is the official national summer sport. Hockey's true origins are uncertain, but the most widely believed story is that the game was created by a group of British colonists settling in Canada who were trying to create a winter version of rugby. Early versions of the game followed many of the offensive rules of rugby (no forward passes, a large number of players on the ice at once) with the goal-scoring of association football. Years later, the forward pass was added and hockey began to form its own identity, while the game began to grow in popularity throughout North America.

Worldwide, ice hockey is a popular sport in all those countries at Northern hemisphere which have long and cold winters: such as Russia, Scandinavian countries, Finland, Baltic countries, Germany, Czech Republic, Slovakia, Poland, France, Switzerland and Italy. Ice hockey is also strong in former USSR republics, such as Kazakhstan. All these countries have strong national ice hockey leagues, and Russia is the home for the multinational KHL (Kontinentalnaya Hokkeynaya Liga, "continental hockey league").

Before we get to the nitty-gritty, let's go over a few popular misconceptions first. In media, especially from places unfamiliar with the sport, ice hockey is often portrayed as a combination of Professional Wrestling and a pub brawl ON ICE! that's only watched by maple syrup-drinking Canadians who riot whenever they lose. That's... Not really the case (for one thing there are a lot of rabid American hockey fans out there, especially in the honourary Canadian provinces of Minnesota, Alaska, and Michigan. For another, riots are atypical.) Although there is a grain of truth, as with all stereotypes:

The National Hockey League (one of the oldest still-running leagues in sports) is currently the largest hockey league in the world, which as of the current 2021–22 season consists of 32 teams across North America (7 from Canada, 25 from the United States), with the most recent expansion being to Seattle for 2021–22. There are also many important leagues in Europe, such as Germany's Deutsche Eishockey Liga, the Swedish Hockey League (formerly known as Elitserien) and Russia's Superleague Kontinental Hockey League, but they usually sit in the NHL's humongous shadow. The dream of many, but not all, European players is to join the NHL, and if an NHL player is sent to a European league it's considered a demotion.

The NHL was formed in 1917 with five teams note Toronto Arenas, Ottawa Senators, Montréal Canadiens, Montreal Wanderers, Quebec Bulldogs. Three of these teams — and four of the seven expansion teams to come in the '20s — dissipated and by 1942, there were officially six NHL teams (commonly referred to as The Original Six note Presumably in contrast to the Expansion Six, who entered together in 1967; it's otherwise something of a misnomer, since the only teams in that group who were part of the original NHL were the Montréal Canadiens and the Toronto Maple Leafs (who were called the Arenas at the time): The Toronto Maple Leafs, Montréal Canadiens, Detroit Red Wings, Chicago Blackhawks, New York Rangers and Boston Bruins. Following the 1966–67 season, the league expanded to 12 teams and over several decades reached the 32-team mark that stands today.

The NHL championship trophy is The Stanley Cup, one of the oldest and most prestigious trophies in all of sports. In the Cup's early days (starting from the Cup's creation until 1912) any team could challenge the current champions to a showdown for the Cup, provided the opposing team could make the trip there of course. Eventually, two leagues, the precursor National Hockey Association (NHA) note Owners of the original NHL teams were all in the NHA, except for the Toronto Arenas owner. The NHL itself was created as a legal means to remove the NHA's Toronto owner, who was loathed by the rest of the owners, from the league and the Pacific Coast Hockey League (PCHL), note created and run by "the godfather of hockey", Lester Patrick, who created many significant rules such as forward passing, the blue and red lines, identifying numbers and the idea of "playoffs" as well as designing and funding the first indoor hockey arena took ownership of the Cup with the winner of each league playing for the Cup every year. The NHL began to form into a superior league, however, and the PCHL, which by then was known as the Western Hockey League, or WHL, suffered financially from lack of quality players and eventually folded, making the NHL the de facto owner of the Cup. This became de jure in 1947 when the NHL legally purchased the Cup. A modern NHL regular season lasts 82 games, with a 16-team playoff season. In recent changes, the league has been divided into four divisions (Pacific, Central, Metropolitan and Atlantic Divisions) with the top three teams in each division and the next top-2 "wild card" teams in the East (Metropolitan and Atlantic) and the West (Pacific and Central) Conferences combined qualifying for the playoffs. The division leader with the most points plays the lower wild card seed, while the other leader plays the first wild card seed, while the 2nd and 3rd place teams play each other. Each round is a best-of-seven series, with teams competing exclusively in their respective divisions before meeting in the semi-finals and then for the Cup. The final two teams play one last best-of-seven round for the Stanley Cup. The Stanley Cup is unique among the major pro sports leagues' trophies in that there's only one Stanley Cup note Well, technically there's three of them; the retired original Cup at the Hockey Hall of Fame, the "authenticated" presentation Cup that replaced it, and the official replica Cup that's displayed at the Hall of Fame when the "authenticated" Cup is unavailable., rather than a new trophy that's made each year and permanently awarded to the the league champion. Winning the Stanley Cup Playoff gives a team possession of the trophy for one year, and the name of the winning team along with its owner, coaches and players note the latter of which have a set of game played limits, though teams can apply for exceptions; the most noteworthy is Denis Savard's addition to the 1993 Montreal Canadiens inscription after missing almost all the season due to injury are inscribed on the trophy. Originally, whenever the trophy ran out of room for team engravings, a new band was added to the bottom. But eventually this led to a truly enormous trophy and the NHL realized it would at some point get too big for a man lift. So now it's limited to 5 bands (each with room for 13 championship teams), and whenever the bottom band is filled, the top band gets removed to the Hall of Fame and a new bottom band is added, maintaining the now-standard size of the Cup.

Hockey: The Rules
Unfortunately, hockey is subject to lots of Artistic License – Sports in the media, so here's an overview.

Ice hockey plays like a smaller version of soccer (score more points than your opponent, etc.,) although there are many key differences. Each match lasts 60 minutes, which are further divided into three 20-minute "periods" with a small break (usually 10-15 minutes) between each period. Unlike field hockey and most other sports which use a rounded ball, the hockey puck is a vulcanized rubber disc — three inches (7.6 centimetres) in diameter and one inch (2.5 centimetres) thick. note Many hockey matches in the late nineteenth and early twentieth century were played with a rubber ball, but the results were not exactly ideal.

The are five positions in hockey:

There are also multiple positions for Officials:

The following list uses National Hockey League rules, although internationally there are some differences (rink size, penalty tolerance, overtime regulations and such):

For those who need a more visual illustration of this information and more, you can go to CBC Sports' webpage for the shorts of the cartoon character,Peter Puck

Works thematically based on hockey: