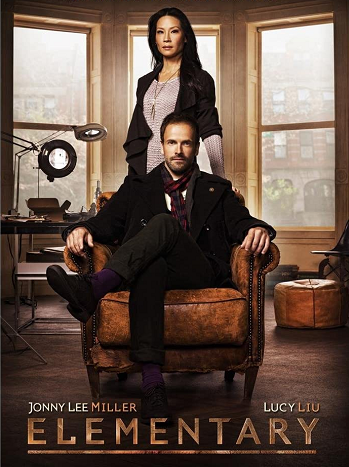 "I know, Watson, you share my love of all that is bizarre and outside the humdrum routine of ordinary life."
— Sherlock Holmes
Advertisement:

Elementary is an American television series that premiered on CBS in 2012 and ran for seven seasons. It presents a contemporary update of Sir Arthur Conan Doyle's Sherlock Holmes detective stories set in New York City. It stars Jonny Lee Miller as Sherlock Holmes and Lucy Liu as Joan Watson.

This version of Holmes was a consultant for Scotland Yard; he became a drug addict following a traumatic loss, then "hit bottom" and ended up in rehabilitation. Joan Watson has been hired by Holmes' father Morland to be his sober companion, to help him adjust from rehab back to everyday life.

Holmes has come up with an interesting post-rehab regimen to keep himself busy — he's going to resume his role as a consultant, this time for the New York police. Watson finds herself coming along for the ride, eventually becoming Holmes' full-fledged partner and a detective in her own right. They are usually assisted by Captain Thomas Gregson (Aidan Quinn) and Detective Marcus Bell (Jon Michael Hill).