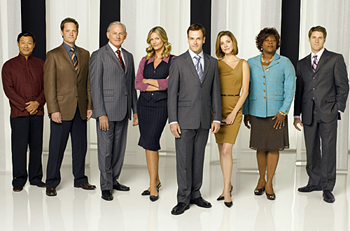 This is a show caught in among Dramedy, Fantasy and The Musical.

Eli Stone (played by Jonny Lee Miller) is a lawyer for one of those scum-sucking firms, who develops an inherited and inoperable (supposedly) brain aneurysm. The brain aneurysm gives him all kinds of hallucinations, many of which involve song and end with everyone in the room staring at Eli as he's just dive-bombed the carpet during a meeting. These visions tend to have something to do with a case he's working on, indicating that the aneurysm gave Eli Psychic Powers. Eli's hallucinations start somewhat wrecking his life, leading him to break up with his fiancee, take on charity/pro bono cases, nearly lose his job/career, etc.

At the end of the first season, Eli had an operation to remove the aneurysm anyway. Thanks to Status Quo Is God, he got it back...but this time he wants it, and gets a Mission from God.