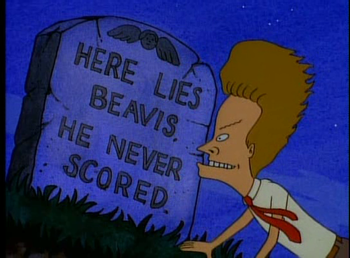 Woah! There's some dead dude with the same name as me!
"Here lies Good Old Fred,
A great big rock fell on his head."
— The Haunted Mansion
Advertisement:

Gravestones should generally be somber or reflective, so in fiction, it's common to put funny epitaphs on them. It could be a poem or a record or suggestion of an ironic or strange death. It could be a pun based on the late character's name. E.g.: "Paul E. Nate - A wonderful husband, father and florist." This is especially common in video games, as the player may blindly ignore the graveyard, or be too busy fighting zombies or whatever. Can be used to as a Shout-Out or a Take That!, often suggesting the fate of a character from another, rival work. Can be an example of Truth in Television. Related to, but Not to Be Confused with, Black Comedy. Can sometimes feature Lame Last Words.