Series / The World According to Jeff Goldblum 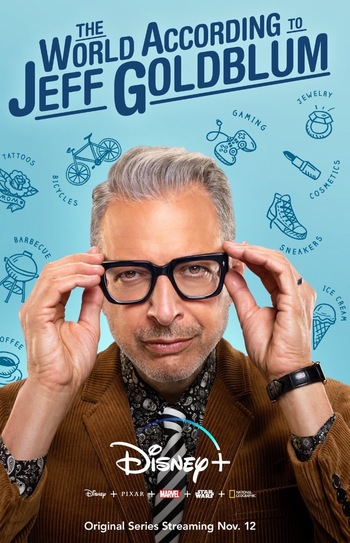 The World According To Jeff Goldblum is a National Geographic Channel documentary series hosted by Jeff Goldblum. It is one of the charter original productions of Disney+, premiering on November 12, 2019.

The series follows the self-proclaimed "curious cat" as he journeys beyond his world of acting and jazz music to travel the United States to learn and deconstruct the history and culture behind common yet much-loved — often passionately so — staples of modern everyday life, such as sneakers, denim, tattoos, and ice cream. In each half-hour episode, he crosses cultural, generational, and technological divides, makes new friends, and randomly bursts into snippets of song.

Shooting of Season Two was heavily delayed by the COVID-19 pandemic, but it ultimately premiered on November 12, 2021 as part of the "Disney+ Day" 2nd anniversary event.