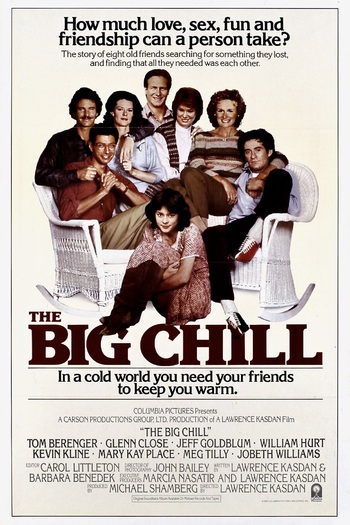 "It's a cold world out there. Sometimes I feel like I'm getting a little frosty myself."
— Meg
Advertisement:

A group of people who knew each other as college students and friends during the 1960s end up getting back together some 15 years later, after their friend Alex commits suicide. All of them had gone along their separate ways, but now have reason to look back and wonder where their idealism went — they were campus liberals who, in The '80s, have basically become yuppie establishment types suffering the angst of entering middle age in the Reagan era, lampshading the fact that, as one of them puts it, "No one had a cushier berth than we did". But along the way they renew their friendships, and sometimes even more, as they try to understand why Alex, with all of his potential, worked at menial jobs and then, for no apparent reason, decided to kill himself.