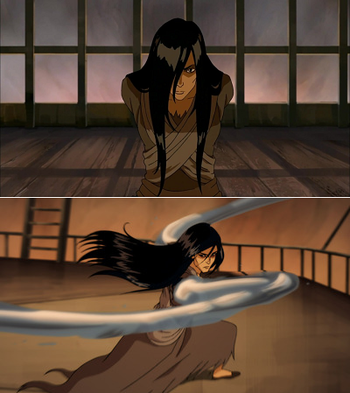 Anything your arms can do, her water arms can do better.
"Daredevil's 'power' is that he's not quite blind."
— Captain America, I Don't Need Your Civil War

A character is born with or acquires some handicap that prevents them from functioning normally. However, due to phlebotinum exposure or training, never mind Disability Immunity, they develop something that not only makes up for what's missing, but goes beyond it.

Blindness seems to be a popular one for this. Indeed, the entire trope seems to be based around the idea that blind people's other senses become more acute to compensate. This does happen in real life but to a far weaker degree than the trope, simply because blind people get more exercise with paying close attention to their other senses, and the brain is capable of re-purposing unused spaces in the sensory and motor cortices. Some studies have indicated that people born deaf have better peripheral vision, as well. In Greek mythology Tiresias is an old blind man, but also an oracle, so he can see different things.

A realistic twist is for the power to have Logical Weaknesses, depending on the limitations of what the character uses to compensate for their disability. In less realistic examples, Disability Superpowers are so powerful that they negate the original disability entirely and/or so prevalent that no disabled people in the world are actually disabled. When Played for Drama, the character will still face Sense Loss Sadness over their disability despite any compensating. If lacking one or more familiar sensory modes in favor of something more exotic is the norm for a species, rather than an anomaly or the result of injury, that's Bizarre Alien Senses. If the power or ability the character gets is useful but doesn't quite make up for having a disability (usually the power/ability is a bit more mundane), that's Handy Shortcoming.

Compare Keeping the Handicap for when a character decides that they'd rather stay disabled than become abled.

Can be a specific form of Cursed with Awesome. Relates to Good Prosthetic, Evil Prosthetic and Useless Without Powers. Compare with the more mundane Inspirationally Disadvantaged. Those with Blindfolded Vision invoke this trope.