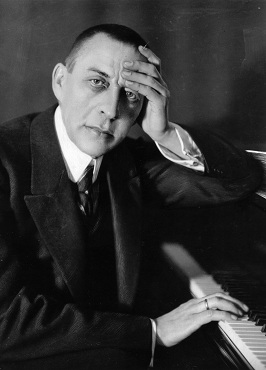 Sergei Vasilievich Rachmaninoff (Russian: Сергей Васильевич Рахманинов), (1 April 1873 — 28 March 1943), was a Russian-American composer, pianist, and conductor. He was one of the finest pianists of his day and, as a composer, very nearly the last great representative of Russian late Romanticism in classical music. Early influences of Tchaikovsky, Rimsky-Korsakov and other Russian composers gave way to a thoroughly personal idiom which included a pronounced lyricism, expressive breadth, structural ingenuity and a tonal palette of rich, distinctive orchestral colors.

The piano features prominently in Rachmaninoff's compositional output, either as a solo instrument or as part of an ensemble. He made it a point to use his own skills as a performer to explore fully the instrument's expressive possibilities. Even in his earliest works, he revealed a sure grasp of idiomatic piano writing and a striking gift for melody.

He had big hands.