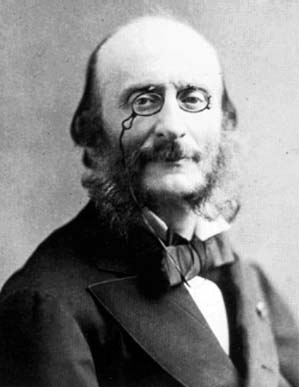 That's what he's most famous for. And truth be told, he'd be proud to be famous for it.

Born in to a Jewish musical family in Cologne, his father gave him a violin at the age of six. By the age of nine, he was composing songs and dances and had taken up another instrument, the cello. At 14, his father had him move to Paris to study cello more seriously. And study cello seriously he did (becoming renowned as a virtuoso). At first.

However, studying cello was hard, especially given the performance schedule. Plus, you had to play all of this really boring serious music. Offenbach preferred the lighter side of life, and began composing fun, light pieces to play. It was on the back of such light pieces that he became famous.

You see, in the 1850s, French opera had become thoroughly serious and self-important. (It's France, after all; art of all kinds is Serious Business.) Offenbach, a lighthearted man with a delicious sense of irony, had always been known for his love of poking fun at the Parisian musical establishment, often in the most scandalous way possible. So he began writing operettas making fun of contemporary French society and particularly the French musical scene.

Despite some severe restrictions—thanks to some weird laws in force at the time,note It being the height of the Second Empire, which drew its support from more conservative elements in French society, "traditional morality" was the rule of the day. he was at first forced to write for a tiny (300-seat) theatre putting on shows with a maximum of three singing/speaking parts—Offenbach made himself the king of the Parisian comic stage. It's in this circumstance that he ended up writing Orphée aux enfers (Orpheus In The Underworld), reimagining the story of Orpheus and Eurydice (a famous one in opera) as the tale of a middle-class man and his wife getting up to some truly scandalous shenanigans. Hence the famous cancan—the dance is nothing if not scandalous.

In short: The French version of Gilbert and Sullivan, except with a lot more scandalous material (from an Anglophone point of view; from a French or German point of view G&S are a more stodgy version of Jacques Offenbach.)

Also, this about the "Gendarmes' Duet" from Geneviève de Brabant: the tune was used for the Marines' Hymn. Since the Gendarmes are actually cowards, this is very amusing. His final opera, The Tales of Hoffmann was made into a 1951 Technicolor film by Michael Powell and Emeric Pressburger.

Works of Offenbach with their own pages