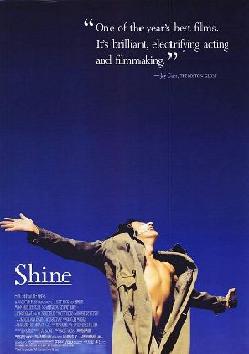 Shine is a 1996 Australian film based on the life of classical pianist David Helfgott, directed by Scott Hicks.

Based somewhat on Helfgott's real life, it follows him through his formative years as he rehearses the piano and gets accepted to the Royal College of Music in London and his subsequent mental breakdown and years in institutions. It stars Geoffrey Rush (as Helfgott), Lynn Redgrave (as Gillian), Armin Mueller-Stahl (as his father, Peter Helfgott) and Noah Taylor (as the teenage David).

It grossed over $35 million and won Rush his first Oscar for Best Actor in 1997. One noted critic of the movie was Margaret Helfgott, David's sister, who said that she felt that "an evil had been done"; the film portrayed their father Peter as a strict disciplinarian and controlling bully and Margaret maintains he was almost the opposite in real life.