Film / The Siege of Firebase Gloria 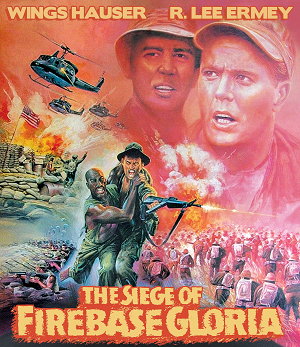 The Siege of Firebase Gloria is a 1989 film starring R. Lee Ermey and Wings Hauser about US Marines and Soldiers trying to hold a tiny, insignificant outpost in South Vietnam against a massed assault by the Viet Cong during the 1968 Tet Offensive.

Wingman: I got some rockets left.
WO Moran: We don’t get paid to bring 'em home. Leave me some widows behind!
SGM Hafner: Anyone know who these belong to? This was Corporal Miller! He’s dead! Hell, the whole damn gun crew is dead! And to add insult to injury, Charlie took the fifty-fucking caliber machine gun with him! I don’t have any respect for Corporal Miller anymore, because he allowed his troops to relax! They let their guard down for five fucking minutes, and Charlie took advantage of it! LOOK AT 'EM, GODDAMNIT! Pay attention! Stay alert, stay alive, it’s as simple as that!
1SG Jones: I care. I don’t care about a lot of it. But what I do care about, I care about a lot.