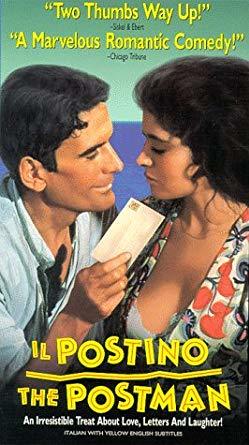 A 1994 Italian film directed by Michael Radford, Il Postino ("The Postman", and originally released under that title in the U.S.) is based on the 1985 novel Ardiente paciencia. The film starred Massimo Troisi, who died of a heart attack within hours of finishing the film. Troisi had long suffered heart problems; according to his partner Nathalie Caldonazzo, Troisi had "the heart of a 70 year old", and had surgery when he was 20. Before the film, he had surgery in Houston which failed to replace a valve, leaving him extremely thin, so he resolved to shoot and finish Il Postino before having his next surgery which tragically never came.

Chilean Poet Pablo Neruda is living in exile on a small Italian island. A simple fisherman named Mario Ruopollo becomes a postman. Mario starts delivering Neruda's mail and discovers the wonders of poetry. He comes to Neruda, asking his advice, when he falls in love with a woman named Beatrice.

It owned the longest first-run theatrical run in New York City's history, even running longer than Titanic (1997); it was in theaters for over two years, long into the film's home video and then cable exhibition tenure.