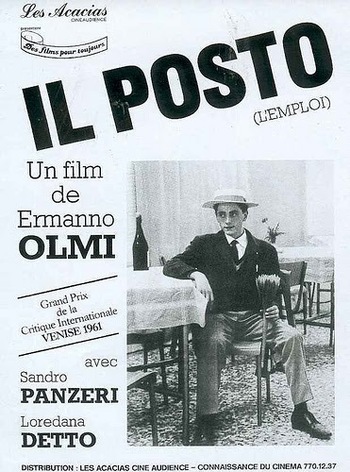 Il Posto ("The Place"...not The Place but a job placement) is a 1961 film from Italy directed by Ermanno Olmi.

The story follows Domenico, a young man (very young, he doesn't look much more than 16) living in a run-down suburb of Milan. As the film opens, he goes downtown to get an office job that his parents are pushing him to take. After a series of vaguely embarrassing interviews and exams, he gets a menial, entry-level job, at a company so generic that the movie never says what the company makes or does.

Decades of office drudgery and wage slavery loom, but there's one ray of sunshine amidst the gloom. A pretty girl named Antonietta shows up at the job application process along with Domenico. They take the tests together and have coffee for lunch. After the both of them get hired, Domenico keeps an eye out for Antonietta, hoping for romance.