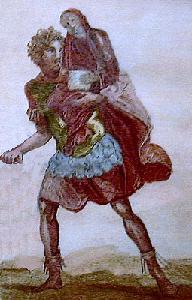 This is when someone of high status is hunted. He was on the wrong side of a feud — or he was just unlucky — or The Emperor has a really, really, bad temper. Sometimes there's been a bloody regime change and all nobles are targets. Whatever the reason, he is a noble fugitive. Sometimes he flees to the protection of a rival king; sometimes he chooses to live amid the wild barbarian hordes; sometimes he’s gathering an army, and will return and defeat the bad guys and have an Awesome Moment of Crowning — whatever. Right now, though, he is a Noble Fugitive.

Related to Remittance Man, but a Remittance Man is not necessarily being hunted. Someone with a Mysterious Past is likely to have this as his backstory as well.

Contrast Moses in the Bulrushes, who was too young to know of his heritage. Compare Hidden Backup Prince, who is hidden as a child and doesn't know their true heritage. Also see King Incognito and Defector from Decadence.

Heroic Russian Émigré is a subtrope relatively common in 20-century Western fiction, especially Cold War-era novels: a Russian citizen (often a nobleman) who escaped the Bolsheviks and becomes the West's ally in fighting the Soviet regime.