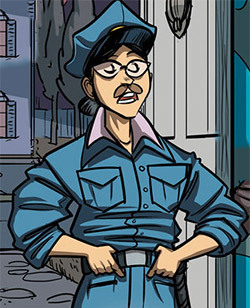 Crime is rampant on the streets. Drugs are being sold, people are dropping at the sound of two boards being slapped together, windows are shattering to make way for burglars... who knows what sort of craziness goes on every day? Then, police officers show up to either take back the loot or perform a vigilante killing, and it looks like the day is saved...

Not! Surprise, surprise; sometimes by way of a Traitor Shot, the police officers are revealed to be scofflaws themselves (or, at the very least, a bunch of people who have taken the law into their own hands). Naturally, this upsets the balance of law and order between criminals and the police; Hilarity Ensues (as does chaos every so often). At times, it's a single person acting alone; at others, it's an organized group; but in fact, impersonation of a police officer has taken place.

Related to False Flag Operation or Dressing as the Enemy. Compare Bavarian Fire Drill, a.k.a. getting people to do what you want by acting authoritative and letting them draw their own conclusions. Unrelated to No Badge? No Problem!, which is where someone affiliated with the authorities but who actually isn't one acts as though he were. Phony Veteran is the military equivalent.

Do Not Try This at Home — intentionally attempting to impersonate a police officer is a serious crime in most jurisdictions. With a few exceptions (including Zombi 2, which had cameos from actual off-duty NYPD officers in full uniform), live-action films and television shows with police officers in them use uniforms that are deliberately incorrect to avoid any hint of this. Fancy dress police costumes are also deliberately different from genuine ones to reduce the chance of being mistaken for a genuine officer. In Real Life, police forces/departments exercise rigorous control over their uniforms — losing, giving away, or otherwise transferring any part of their uniform can lead to serious disciplinary measures being taken against officers and old and worn items are destroyed rather than risking the chance of them falling into the wrong hands. It's very usual for uniforms to be stored on police premises only and officers change into them on arrival for their shifts and at no time do they leave the building unless being worn on duty.