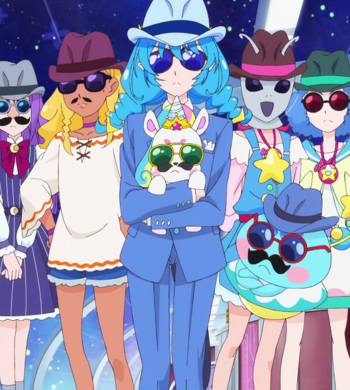 And that's how you get into a mafia's hideout.
Woman at ticket booth: You are... Cornelius Thorndyke and Ezra van Holt?
Alexis Wilder: Yea [ahem, hum] Yes, that's correct.
Woman: Yes, well, "Cornelius," I'm afraid these picture's don't—
Alex: That's my morning face! Ezra here just had some work done, and that's "Mister Thorndyke" to you, smartass.
— Two 20-somethings trying to get into the museum with senior citizen IDs, Our World
Advertisement:

A sting operation in which the hero tries to infiltrate the villain's organization by passing themselves off as one of the bad guys.

For example, Bob is going to meet Alice to be given an Evil Plan to carry out. The hero, Charlie, catches up with Bob before he can meet with Alice. Since Alice and Bob have never met face to face, Charlie goes to the meeting point, pretending to be Bob. Charlie is attempting an Impersonation Gambit. If successful, he will take down Alice's organization, but this gambit doesn't always go as planned.

A subtrope of The Infiltration, only in this case, they are impersonating a real person that the villains were expecting to meet. Can result in a You Are Already Checked In if the person they're impersonating shows up. Compare Dressing as the Enemy which this trope can often overlap with.

Inexperienced in impersonation, the heroes might act according to Most Definitely Not a Villain (except that they're trying to pretend that they most definitely are a villain). They may also face the need to prove that they're as evil as the impersonatee is known to be.