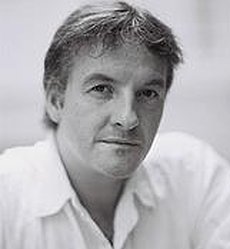 John Connolly (born 31 May 1968) is the best-selling author of a number of ass-kicking horror, supernatural and mystery novels.

His main hero, private detective Charlie Parker, is a badass anti-hero who sees dead people and keeps company with murderers and criminals. After the death of his wife and daughter he goes off the deep end, before resurfacing months later to wreak havoc on America's criminal underworld. There are currently thirteen titles in the series: twelve novels and one novella, the latter of which can be found in the Nocturnes collection along with many of Connolly's short horror stories. A further novel-length thriller, Bad Men, is also set in the Charlie Parker universe but centres around a different set of characters and situations; like the Parker novels, depictions of human evil are offset by some genuinely scary supernatural visitations.

He has also written The Book of Lost Things, a coming-of-age story set in London during WWII about a kid who gets lost in a fantasy world after a bomber crashes in his back garden, and Nocturnes, a collection of short stories packed full of enough Nightmare Fuel to scare the bejesus out of anyone. In May 2013 Connolly released a novella, 'The Wanderer in Unknown Realms', set in the interwar period and concerning a shell-shocked veteran who is hired to track down the owner of a Tome of Eldritch Lore who has disappeared under mysterious circumstances; Word of God has confirmed that it takes place in the Book of Lost Things universe.

Connolly is also the author of two sci-fi/fantasy series for young adults. The Samuel Johnson vs. The Devil trilogy does Exactly What It Says on the Tin: a young boy growing up in a quiet English village finds the town repeatedly overrun by the demonic forces of Hell itself. Surprisingly, Hilarity Ensues more often than not, usually due to the incompetence of the demons, many of whom turn out to be sympathetic to Samuel and his friends. The darkly comic tone of the series has led to comparisons with Terry Pratchett and Monty Python. The final book in the trilogy has now been published and completes the story, although Connolly has said that he might return to the characters with a new scenario at a later date. Connolly's newer YA series, The Chronicles of the Invaders, is co-written with his partner, Jennifer Ridyard. In an Alternate Timeline where the Earth was taken over in a (mostly) bloodless coup by an alien race sometime in the early '90s, an Illyri princess living in isolation in Edinburgh Castle accidentally finds herself romantically involved with a member of the human resistance, whose attempts to drive out the invaders are increasingly leading to violent hostilities between the races. Only two books have been published thus far, but the authors predict that the series will eventually run to three or four entries.

See the specific pages for tropes relating to The Book of Lost Things and the Charlie Parker Series. For the 2009 movie based off his short story "The New Daughter", see The New Daughter.