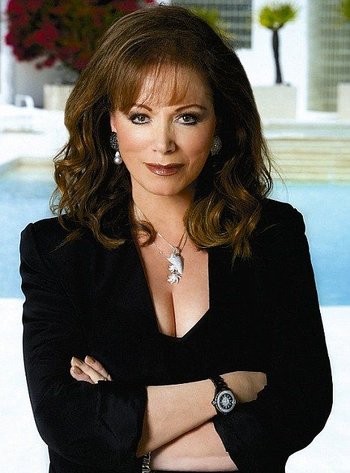 "The first rule of writing is write about what you know, not what you think you know."
Advertisement:

Jacqueline Jill "Jackie" Collins OBE (4 October 1937 – 19 September 2015) was the English-born author of 28 best-selling novels. She has been compared with authors such as Judith Krantz, Harold Robbins and Sidney Sheldon due to the subject of her books, which is (to quote Sheldon's entry) "tales of treachery, passion, and love often set among The Beautiful Elite — wealthy industrialists, entertainment icons, gangsters, even heads of state". Her sister is Joan Collins, who has starred in the film versions of Jackie's novels The Stud and The Bitch and is known for starring in the 1980s soap opera Dynasty, which does play out like a Jackie Collins novel in the sense that it's about rich people being naughty.

Ms. Collins passed away September 19, 2015, after a six-year battle with breast cancer. She kept her illness secret, telling her beloved sister Joan only two weeks before her death and continuing to make public appearances until the last few days before she passed.

Her books contain examples of: