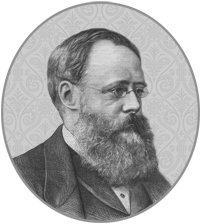 William Wilkie Collins (8 January 1824 – 23 September 1889) was an English writer best known for his novels The Woman in White and The Moonstone (arguably the first detective novel in English literature).

He was a close friend of Charles Dickens, and several of his novels were originally serialised in Dickens' magazine All the Year Round.

Works by Wilkie Collins with their own trope pages include:

Other works by Wilkie Collins provide examples of: