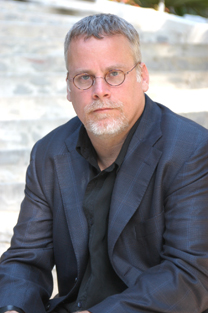 Michael Connelly (born July 21, 1956, Philadelphia, Pennsylvania) is an American author of detective novels and other crime fiction, notably those featuring LAPD Detective Hieronymus "Harry" Bosch. His books, which have been translated into 35 languages, have garnered him every major award in his genre, such as the Edgar Award, Anthony Award, Macavity Award, Los Angeles Times Best Mystery/Thriller Award, etc. Connelly was the President of the Mystery Writers of America from 2003 to 2004.
Advertisement:

His style does not usually involve researching for his books; he says that he prefers to just write, focusing more on his characters than the surroundings. His books often reflect on events happening in the world, like the 9/11 bombings and the beating of Rodney King. Most of the events in Harry Bosch's life in his novels are loosely based on events he himself was witnessing or undergoing. Connelly has been releasing novels more or less annually since 1992.

Harry Bosch is Connelly's most frequent protagonist, starring in about two-thirds of his novels. Connelly's second most-used protagonist is ethically dubious defense lawyer Mickey Haller, who has appeared as the protagonist in five Connelly novels. Other POV characters besides Harry Bosch include Los Angeles Times crime reporter Jack McEvoy, LAPD detective Renee Ballard, and FBI profiler Terry McCaleb. Characters in one series pop up in other series quite frequently, as shown below. All of his books are partly or wholly set in Los Angeles, to the extent that the series as a whole is a pretty good guided tour of the city.

Has a regular poker game with a fictional novelist.

The films Blood Work and The Lincoln Lawyer are based on his novels.

A series titled Bosch, based on the Harry Bosch character with Titus Welliver as Bosch, debuted on Amazon in 2014. Connelly is one of the writers for the show, having written or co-written each season premiere as well as most season finales.