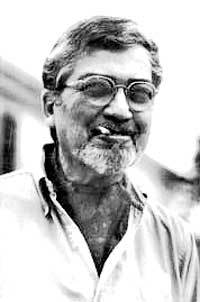 A highly influential science fiction author, Alfred Bester (December 18, 1913 – September 30, 1987) was pretty much the Orson Welles of the literary world: an overweight, gregarious man who took chances with the format like nothing seen before. His works include The Demolished Man (the first winner of the Hugo Award), The Stars My Destination, and stories in comics like The Phantom and several DC characters. The latter gave us easily his most famous pop culture contribution in the Green Lantern oath. His short-story "Fondly Fahrenheit" was turned into a made-for-TV movie, Murder and the Android in 1959.

He loved Painting the Medium, using illustrations, different fonts, and changes in point of view to enhance the story being told, plus the stories were always incredible on their own. Sadly, his career was hampered by failing eyesight in the mid-1970s, and he died in 1987 from complications from a broken hip.

He was the namesake of characters in two later classic sci-fi TV shows, Babylon 5 and Firefly and a character in one of the Callahan's Crosstime Saloon stories.