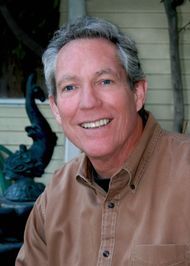 James P. Blaylock is an American fantasy author. He is a friend of the authors K. W. Jeter and Tim Powers, and shares with Powers a Creator In-Joke involving the poet William Ashbless.

Recurring characters in his works include the Victorian gentleman adventurer Langdon St. Ives and the villainous Ignacio Narbondo.

Works by this author include examples of: