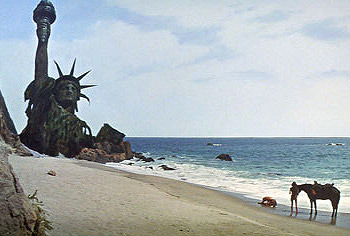 "You maniacs! You blew it up!"
"The only danger is if they send us to that terrible Planet of the Apes. Wait a minute... Statue of Liberty... that was OUR planet!"
— Homer Simpson, The Simpsons
Advertisement:

At some point of a Speculative Fiction story (often the end), the apparently alien setting turns out to be none other than Earth, warped and twisted by disaster, disease, the passage of time, or some other instrument of drastic change.

Almost invariably this involves a character who was sure he was anywhere but Earth discovering the Awful Truth, after finding The Constant.

At some point, this actually was very shocking (partially because humanity was very close to blowing itself up in the 1960s) and is one of the most famous kinds of Twist Ending. Through over-use, these days, it's become The Un-Twist; it would usually be more surprising if the apocalyptic planet turned out to be anywhere but Earth.

As you might expect, this is an Ending Trope, so there are many spoilers below. However, once you've read the description above, most Earths All Along are self-spoiling anyhow.

Due to Pop-Cultural Osmosis in Science Fiction, this trope is more difficult to credibly pull off in contemporary stories. One needs only to look at the star constellations to know that one is on Earth as constellations appear as they do nowhere else. While the other planets in our solar system may display some of the same star patterns, with the possible exception of the North Star, we can rule out all other planets in our solar system as a plausible "assumed" setting for this trope. Audiences are also more wary of the Aliens Speaking English trope as this should be a clue that one is still somewhere on Earth. In many contemporary stories, if this trope does come up, it's more of a curiosity to the audience than a relevant plot point that the characters care about. The occasional Fantasy setting turns out this way sometimes due to an Easter Egg, Freeze-Frame Bonus, or a Chekhov's Gun that is insignificant to the characters but recognizable to the audience.

Compare Advanced Ancient Humans, when there was a technologically advanced human civilization in ancient times; Fictional Earth when the planet clearly is some version of Earth, but still very different; and Earth That Was and Earth That Used to Be Better when Earth was lost, destroyed, or fell on hard times long ago. See also Humans Through Alien Eyes and Tomato Surprise. Sub-trope of Not Where They Thought.

It Was Earth All Along

Made even funnier by how they all call the planet Earth throughout the episode, and the title itself is "When pigs ruled the Earth".