Literature / By The Waters Of Babylon 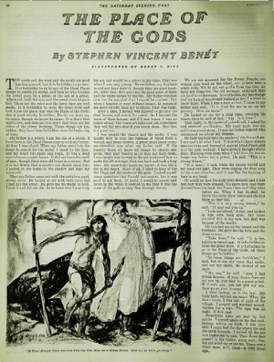 A 1937 short story by American writer Stephen Vincent Benét, which was published originally in The Saturday Evening Post, and first titled "The Place of the Gods". It was republished in 1943 with The Pocket Book Of Science Fiction under its later title. This prescient tale details a young man, John, from a future where his people and others live as foragers. He is the son of his tribe's priest, and they alone can handle metal found in the homes of long dead people, called "Dead Places". There is also The Place of the Gods, where no one may go.

He crosses a long river John calls "Ou-dis-sun", entering The Place of the Gods, and is moved by its power. Seeing a statue of a god (really, a human), he reads "Ashing" on its base. A building which he sees reads "Ubtreas". He is chased by wild dogs, taking refuge in a building. There he sees an image of another dead "god", and realizes suddenly they were human just like him, with power that overrode their sense.

The story is not only notable as a probable Trope Maker of many postapocalyptic tropes, but also seemingly predicting the effect of nuclear warfare with scary accuracy, prior to the atom bomb even being invented, let alone used. Whether by pure coincidence or not is hard to say (Benét actually died prior to the first bombings). It's possible however that this was simply extrapolated from uses of current weapons (he wrote it after the Guernica bombing, when the German Luftwaffe destroyed most of a Basque town in northern Spain during the Spanish Civil War) and the possible contamination lingering from using poison gas. If so, accidentally correct writing is in frightening effect.