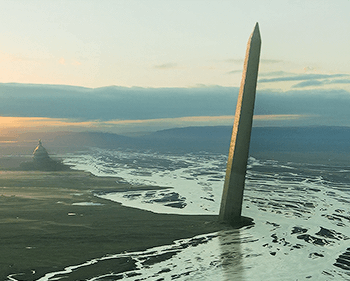 A major city has been completely leveled, whether by a marauding monster, invading alien, nuclear attack, or anything that has a tendency to cause massive collateral damage. The town is nothing but a smoking pile of smouldering rubble. But wait! What's that over there? A few buildings are still standing. And what do you know! It's The White House! It might be a little worse-for-wear, and probably has chunks taken out of it and bits broken off, but it's still standing and easily recognizable.

Basically, this trope is when widely recognized monuments are left remarkably whole in an otherwise devastated city. This occurs because, otherwise, no one would be able to tell just which city this wasteland used to be.

The inverse of Monumental Damage. Sometimes occurs after a Monumental Battle. A specific type of The Constant. It's often related to the Eiffel Tower Effect. Compare and contrast Ragnarök Proofing.