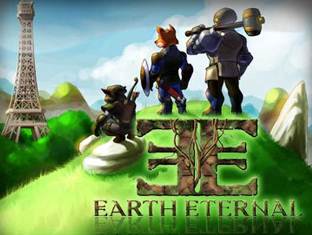 The Age of Man is over. The Age of Beast has begun.
"Earth Eternal, the exciting new MMO that is Completely Free to Play! Join thousands of other players as you explore the dangerous and exciting world of Earth Eternal!"
Advertisement:

Earth Eternal was a free-to-play MMORPG published by Sparkplay Media, with both a browser-based and standalone client. Released in October, 2009.

Earth Eternal took place on an Earth long After the End, wherein humanity screwed up so royally that they destroyed themselves, ending the Age of Man, and the Beasts, anthropomorphic bipeds and Earth's former inhabitants, came back from the Groves to reclaim the world that Man had driven them from in the first place. Here and there were the remains of humanity, such as the Eiffel Tower and Big Ben, but for the most part Man and their creations were long gone.

The game blended aspects of various mythologies along with real history, including places such as Camelot (with an antlered Arthur Pendragon at the helm), as well as other characters such as Robin Hood for players to interact with, perform quests for, and possibly beat to a pulp.

Sparkplay put the game up for auction in early August of 2010 due to financial trouble. Nearly a year latter, the game is back using elements of its Japanese localization. After that, the game has been translated into English, and the game is now available for everyone once more. Unfortunately, three months after the re-release, the developers had announced that the game was on hold. The company was in some serious financial problems, and Earth Eternal has now been thrown to the bottom of the priority list.

On November 21, the Earth Eternal' Facebook page announced that the game was heading offline as of November 24th 2011, 9:00 pm EST.