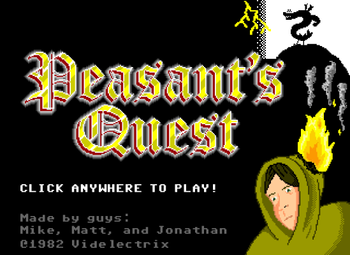 A quest for adventure! A quest for revenge! A quest... for a peasant!
Can one peasant wearing short pants save the countryside from certain burnination? You decide!
— Peasant's Quest Preview

is an Affectionate Parody of the King's Quest series by the Brothers Chaps. It involves a peasant with short pants named Rather Dashing who returns from vacation to find that his cottage had been burninated by Trogdor. Swearing revenge, he goes off on an adventure to be like a peasant and slay Trogdor on behalf of burninated peasants everywhere.

As a Retraux title, the game uses a text-based interface heavily reminiscent of the oldest King's Quest games found on early computers. Graphics do exist, but you have to type in Rather Dashing's actions.