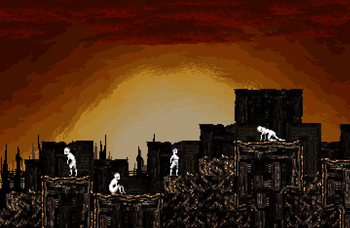 A flash adventure game released on Newgrounds, Perdition follows the story of Eve, an android who gains sentience in an apocalyptic world where androids are mindless slaves ruled by a cruel A.I. overlord named Gomadi, while his nemesis, Tanas, whom he banished to the underground, plots to seduce them away from the mechanical god. Eve, now a slave to Gomadi, is tasked by him to defeat Tanas, whom he sees as creating chaos; meanwhile, Tanas sees Gomadi as a tyrant, and he believes that Eve should exercise her own will. As Gomadi and Tanas wage their war on her mind, Eve must decide which of them to trust.