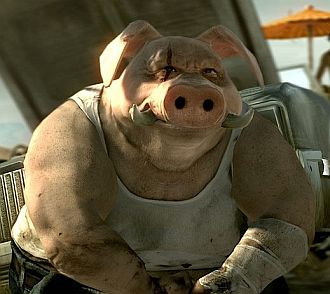 "...Oink. There, you happy now? Now stop starin'."
Kramer: Hey, I just saw a pig man. A pig man! You know, he was sleeping and then he woke up and he looked at me and... and he made this horrible sound, this [makes screeching noises].
George: Kramer, what the hell are you talking about?
Kramer: I'm talking about a pig man! I walked into the wrong room, and there he was!
George: A pig man.
Kramer: A pig man! Half pig, half man!
— Seinfeld, "The Bris"
Advertisement:

A combination of a man and a pig. He doesn't have to be a genetic hybrid, sometimes he's just a pig-like humanoid alien.

In fantasy settings they may be a rare kind of were-animal, or just a pig-faced monster. Sometimes the work will call the Pig Man an "orc" — this probably stems from the fact that orcs are often depicted as pug-nosed, tusked creatures and because of Dragon Quest, a RPG series that was and is very popular in Japan depicting them as Pigmen based off an illustration in 1st edition Dungeons & Dragons. There's also the similarity between the words "orc" and "pork", strengthening the connection (even though the two words are etymologically unrelated). In more futuristic settings, they'll be the product of genetic manipulation; these are usually human with "pig" added to them, but it could be the other way around. Either way, they're used as grunts, they have little intelligence, and they can be slaughtered by the hundreds with no moral implications.

In science-fiction settings, it makes a certain amount of sense that the pig is the preferred species for this type of gene splicing: pigs and humans are anatomically similar enough on the inside that pigs may soon be grown as human organ donors. The similarities even extend to behavior, pigs being omnivores with furless skin and similar behavior in the wild, enjoying beer as much as the next guy.

Due to their association with Orcs and to negative cultural associations of their animal nature, pig men are often cast as villains. Heroic pig men also exist, although they typically have somewhat slovenly characteristics and act as antiheroes. Heroic pig men typically represent men in their late forties, and as such tend to have jaded or hard boiled personalities. They may also have positive characteristics which are typically associated with this demographic, such as jolliness and caring parental traits. The villains in these cases will typically also be cruel, vain, narcissists; Uncle Pey'j from Beyond Good & Evil who went up against trumped up military officials (among others), and Porco Rosso who went up against a cocky fascist fighter pilot are examples of anti-heroic pigs with awful adversaries.

If the character is young then they will represent a chubby child, and may be subject to bullying if they are sympathetic characters, or be bullies if they are non-sympathetic. In fantasy stories heroic pig men will typically be turncoats who have defected from an evil force. For this reason they may go through ostracization or racial stigmatization. Tragic is the story of the Pig Man who escapes his evil masters and tries to live a human life; they'll usually be outcasts who will never know what it's like to be loved.

As the trope name implies, a character of this type will almost always be a Pig Man, similar to how cats are usually female. There are a number of reasons for this, the most prominent being that both pigs and men are stereotypically boorish and disgusting, and of course pigs are not considered the most attractive animal; Beauty Is Never Tarnished after all! If there is a whole race of Pig People you might see some Pig Women in the background but don't expect them to play an especially big role. If there are any, expect Cute Monster Girl to be in full effect; they'll be less a humanoid pig and more a Big Beautiful Woman with pink skin, pig ears, a pig tail and maybe a cute little snout.

In yet another (almost entirely gay) sense, anthropomorphic pigs and boars can be very potent fetish appeal in furry Bara. This is somewhat rare in the Western Furry Fandom (and any cultural context where pigs are culturally considered unappealing to look at), but is more abundant in the Japanese Kemono community, where it peaked during the Year of the Pig

in 2007, and again in 2019. Much of the appeal is in the highly masculine Unkempt Beauty of Pig Men portrayals (sometimes overlapping with Ugly Cute), having much in common with the aesthetic ideals of The Bear community.

Has nothing to do with the title character of The Pigman. Or Pikmin either, for that matter.

One of Lobo's quarries is Mudboy from Porkas-8. He resembles an anthropomorphic pig.

One of Lobo's quarries is Mudboy from Porkas-8. He resembles an anthropomorphic pig.