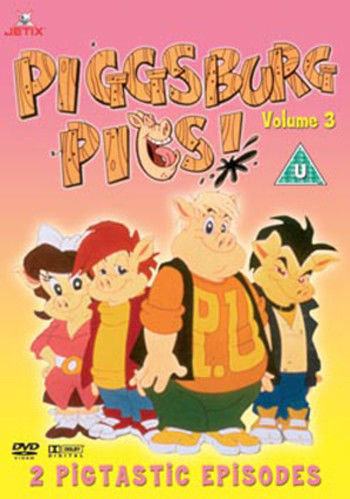 Piggsburg Pigs! is a forgotten little series released in 1990 by Ruby-Spears as part of the very first season of the Fox Kids block. It took place in the town of Piggsburg, which as the name implies was inhabited by anthropomorphic pigs, and focused on the adventures of the Bacon brothers Bo, Portly and Pighead, and their (pet?) duck Quackers.

They were constantly ducking the schemes of the wolves Huff and Puff to eat them for lunch, but supernatural danger would also frequently appear from the Forbidden Zone, the menacing swamp on the edge of town. The heavy usage of some pretty genuinely menacing monsters for a cartoon where the main characters were silly anthropomorphic animals probably explains a lot about why this show isn't more remembered.

The series had a limited Region 2 DVD release, but has yet to be seen again in the States.