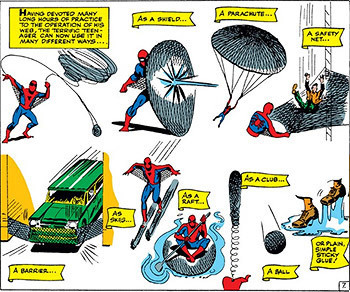 Spidey proves that a little bit of Silly String can go a long way.
EB: all i can do is make a lot of wind blow around!
EB: how is that going to help?
AG: Use your imagination!
AG: That windy thing of yours is more versatile than you think.
— John Egbert and Vriska Serket, Homestuck
Advertisement:

What sets the Swiss Army Power apart from similar power tropes is that the defined base ability never changes. The user simply becomes aware of aspects of their power they didn't think of before. The base rules don't change, only the application of those rules does.

This blend of flexibility and limitation is convenient for the writers because it allows them to get their heroes in and out of a host of sticky situations while avoiding complaints from fans that they've pulled a new power out of a character's ass. It still has a semblance of consistency. However, this also depends on how creative a writer can be about it.

Often confused with Combo Platter Powers where a character is simply given multiple unrelated powers rather than using variations on a theme (like Superman's Flight and Laser Eyes, or Emma Frost's telepathy and diamond form.)

Reality Warper, by definition, is a Swiss Army Superpower. Elemental Powers, especially electric ones, are often treated this way as is Biomanipulation, but even seemingly simple abilities like Super Speed can be given a large number of applications. This is very common when Required Secondary Powers is acknowledged in-universe. In some cases, they can even eclipse the primary ability in usefulness.

Named after Swiss Army Knives, which are pocket-sized sets of 8 - 10 undersized tools that can do everything.

Compare Green Rocks (which do this stuff at the whim of the writers, rather than serving a specific character), New Powers as the Plot Demands (for cases where new powers are the result of Ass Pull), Repower (for situations when a character has their powerset either expanded upon in a "nonlinear" way, or reimagined entirely from the ground up), Adaptive Ability, Swiss-Army Weapon, and Adaptive Armor. When a weak-sounding power has this, then it's Heart Is an Awesome Power. Semantic Superpower, Keystone Superpower, and Imagination-Based Superpower are also related.