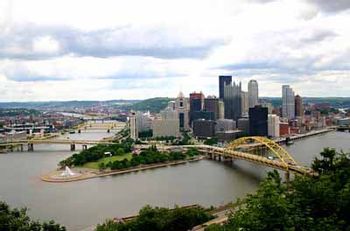 Pittsburgh is the second-largest city in the U.S. state of Pennsylvania (behind Philadelphia), and the economic and cultural hub of Western Pennsylvania. It is located at the point where the Allegheny and Monongahela Rivers combine to form the Ohio River, and has more bridges than any other city in the world (even beating Venice, Italy by three). It was originally named after William Pitt The Elder, later Prime Minister of the UK, for his role in the Seven Years' War. It is the only city in the United States that was allowed by the Postal Service to end in "burgh" throughout the 20th century; see the entry under Please Select New City Name for details.

Home of KDKA, the oldest commercial radio station in the nation and one of the few exceptions to the "W*** east of the Mississippi, K*** west of the Mississippi" rule. Pittsburgh is more of a Midwestern city unlike the solidly East Coast Philly; given the vast countryside ("Pennsyltucky") between them, they're practically worlds apart - Pittsburgh is sometimes called the capital of Appalachia. It is also known as Steel City, due to being a booming (and polluted) mill town for much of its history. Most of the steel industry has left, putting the city in an economic slump for several decades. This tends to be the only thing most outsiders know about Pittsburgh.

However, the city is having a renaissance as a health care, high-tech, and media center, helped by the fact that several prestigious universities are in the area. Very few factories and steel mills remain within Allegheny County; most of the others have been replaced by or converted into offices, shops, and upscale housing. This change has proven healthy for the city; in the 2020 census, Pittsbugh indicated a stable population with a net-loss of less than one percent, the lowest decrease in sixty years (which can be largely attributed to elderly residents passing away, given the city's high median age). Some of this is starting to rub off on the mainstream, as the city is increasingly used as a setting for trendy yuppies in film. It helps that many movies are filmed here anyway, the filmmakers are now less likely to call it something else.

The combination of rivers and Appalachian hills leads to countless natural vistas of the region. Many people would pay to see the kind of view that the average Pittsburgher gets from the parking lot of their grocery store or on their daily commutes. As much of the terrain is too rugged to build on, many urban and suburban areas are interrupted by acres of woodland. Seeing deer stroll through your driveway is a common sight, regardless of whether you live in the city limits or on a farm the next county over.

Pittsburgh has arguably the best pro baseball stadium in the country, which houses the Pirates. Its pro football team, the Steelers, had more Super Bowl trophies than any othernote until the New England Patriots tied them in 2019 and was tied with Dallas and Denver in having the most Super Bowl trips until New England surpassed them all in 2016. They also have a longstanding rivalry with Cleveland (against whom they have a lot of Curbstomp Victories). The Penguins are most known for Sidney Crosby, who you've probably heard of, along with his rival Alex Ovechkin even if you don't watch hockey. Pittsburgh has no pro basketball team, which is another interesting play on Cleveland, which lacks a pro hockey team. All three of Pittsburgh's major league teams—and more than a few minor league clubs—wear black and yellow

, the colors on the city flag (known officially and by every Pittsburgher ever as "black and gold").

Despite rumors (and colorful accent) to the contrary, Pittsburghers do not import R's from New England. The most noteworthy colloquialism is "yinz", which is generally used in the place of "you all". Other, lesser used terms are "nebby" (nosey), "gum band" (rubber band), "buggy" (shopping cart), and "n'at" (a Verbal Tic that stands for "and that," meaning "and so on"). Another habit is to turn the "ow" sound into "ah," such as "downtown" becoming "dahntahn". The city's residents themselves are something of a Broken Base. Depending on whom you ask, Pittsburgh is either a clean, beautiful, artsy, vibrant city with affordable housing, relatively low crime, and plenty of good schools and job opportunities; or an uncultured shithole filled with racial tensions, overpriced housing catering to tech workers from out of town, dreary weather, and bridges that are quite literally falling apart.

Pittsburgh International Airport (official abbreviation: PIT), located about 20 miles west of downtown in Findlay and Moon Townships, is notable for a few reasons. When the current terminal opened in 1992, it included a full-blown shopping center known as "AirMall" (after the company that operates it), featuring over 100 name-brand retailers. It was the first major shopping center located in an airport anywhere in the world. Additionally, the AirMall company and the airport authority reached an agreement that all retail chains that operated within the airport had to charge the same prices as locations outside the airport. This policy remains in force today. It was also the first airport in the world to offer email fare alerts. In arguably an even more notable event, in 2017 PIT restored full terminal access to the non-ticketed public (though only during normal working hours on all days of the week), making it the first US commercial airport to allow general public access past the TSA checkpoint since 9/11. Visitors must sign up for the program at the airport's website, and must pass the same TSA security checks as ticketed passengers. (A similar program was later introduced at Tampa International, and is set to be trialed at Detroit Metro during the 2019 holiday season.)

, one of the largest furry conventions in the world, moved to Pittsburgh in 2006 and takes over downtown annually. The city has embraced the con, not the least because of the considerable revenue (in the millions) it brings to the city over the weekend it's held. The affection is reciprocated; when downtown cafe Fernando's was threatened with closure, the furry community donated over $20,000 to keep the doors open.

As a side note, Pittsburgh is also the filming location of our very own Echo Chamber.

The city of Pittsburgh is officially divided into 83 different neighborhoods. Besides Downtown, the city is divided into North, South, and East, based the three rivers.

Downtown: Sits at the point where the three rivers meet. At the very point is a lovely city park that was once a Revolutionary War fort, then later the site of numerous factories and railyards over the years before the space was bought by the city in the 50's for...something (the park's construction took over twenty years due to numerous idea changes). Downtown has a fascinating architectural blend of modern office buildings with elegant 1800's and early 1900's structures. Its most notable buildings include PPG Place, which looks like a futuristic glass castle, the county courthouse, which was built in the 1800's and looks like a medieval castle, and the US Steel Tower—the tallest building in Pittsburgh—which sports the widest roof in the world for a building its size. The area is known to Yinzers as "Dahntahn".

East End: The area that fans out east of Dahntahn, between the Allegheny and Monongahela rivers. Contains the wealthiest, as well as arguably the roughest neighborhoods in the city. There's no special Yinzer pronunciation here, since the neighborhoods are distinct enough to warrant their own mention. The following are the most well-known, though there are many others:

North Side: The area north of the Allegheny River. Formerly the city of Allegheny, the population is predominantly African-American and Slavic. A very working-class area with many picturesque Orthodox churches. Heinz Field and PNC Park, the stadiums for the Pittsburgh Steelers and Pirates, respectively, are located here, as are several museums. The Mexican War Streets are here as well, but don't let the name scare you, since it's one of the nicer neighborhoods in the region.note The name comes from the fact that they're named after Generals and battles in the Mexican-American War Yinzers call it "Da nor'side".

South Hills: South of the Monongahela River, but not to be confused with "South Side"—Pittsburgh's largest nightclub district—which serves as the entry point for the South Hills. It is an economically diverse region. In addition to said nightlife district, the neighborhoods range from million-dollar mansions and condos atop Mt. Washington as tourists line up to ride the inclines, to middle class neighborhoods like Crafton Heights and Brookline which seamlessly blend into the suburbs they border, to rougher areas like Mt. Oliver and Knoxville. To any Yinzer, it's pronounced "Sahth'ills".

The 'Burbs: The city limits of Pittsburgh contain just over 300,000 people, but has an extended metropolitan area of 2.3 million. The region extends into parts of northern West Virginia and southeastern Ohio. The suburbs range from industrial towns such as Clairton, Braddock, Ambridge, and Aliquippa to middle class areas such as Beaver and Center and to the extremely upper-crust Upper St. Clair and Fox Chapel.

Things locals pick up in fiction, n'at
While you're enjoying Pittsburgh in fiction, please enjoy these assorted "local Pittsburghers pick this stuff up" items:
Pittsburgh provides examples of these ones, n'at

Pittsburgh provides examples of these tropes: