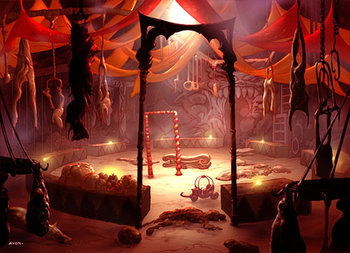 C'mon, it'll be fun! The Cult of Rakdos is a scream!
"I mean, really, what kind of a demonically evil scheme involves rollercoasters and cotton candy anyway?"
— Murray the Demonic Skull, Escape from Monkey Island
Advertisement:

Overnight, the circus came to town. But something's wrong — very wrong. The ringmaster is abusing the animals and performers, and the circus music, which should be cheerful, seems menacing. The attractions (especially The Freak Show) seem off, the cotton candy is a sickly shade of green, the knife thrower doesn't miss, and the clowns... well, the less said about the clowns the better.

And people are disappearing, either consumed by or turned into the circus denizens.

This trope is the brother to The Little Shop That Wasn't There Yesterday, and often used in context with freaks, providing instances of either Red Right Hand or The Grotesque.

A common variation on the theme is a killer amusement park, with homicidal costumed mascots and a fun house that's anything but. If it's in a video game, expect a roller coaster that acts an awful lot like a mine cart.

Something Wicked This Way Comes, a novella written by Ray Bradbury and published in 1962 and turned into a movie in 1983, is a big inspiration for this trope, although the 1919 movie The Cabinet of Dr. Caligari is probably the Trope Maker.

Example of:
Amusement Park of Doom