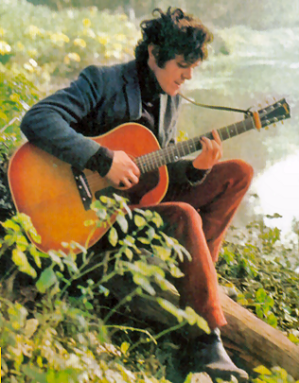 Someone's singing and, oh gosh, we're pretty sure it's him.
Superman or Green Lantern ain't got nothing on me.
— "Sunshine Superman"
Advertisement:

Donovan Philips Leitch (born 10 May 1946) is a Scottish singer-songwriter who, in the mid-to-late 1960s, attained worldwide fame as an icon of the burgeoning "flower power" movement, chiefly through songs espousing the virtues of love and altruism. Though a self-professed contemporary bard in the classic sense of the term—most well-known for simple, acoustic balladry on the guitar—Donovan was, and remains, a hugely eclectic artist, making a majority of his albums Genre Roulettes that experiment to a greater degree than his inexorable public image as a long-haired, tunic-clad "hippie" — a term that the man himself seems to dismiss to some extent — would suggest.

Born and raised in the ruins of post-war factory town Edinburgh, as a teenager, Donovan—inspired by the writings of beat poets such as Allen Ginsberg and Jack Kerouac, along with books on eastern philosophies—left home to live like a Bohemian, together with his Heterosexual Life-Partner Gypsy Dave (or "Gyp", for short). Though Donovan's father was a factory lifer, his love of classic English poetry was a large influence on the young Donovan, one that can be heard throughout his discography. As chance would have it, Donovan found his creative muse in music, eventually becoming a skilled guitarist; he was well known for his a distinctive "clawhammer" finger-picking style, taught to him by banjo virtuoso Derroll Adams, whom Donovan idolized.

Donovan became an overnight sensation after a fateful appearance on Ready, Steady, Go!, scoring an early hit with "Catch the Wind". He was quickly deemed by the media a Bob Dylan copycat on account of the many similarities "Catch the Wind" had to Dylan's songs of the period such as "Blowin' in the Wind". They had, in fact, both drawn inspiration from traditional Irish balladry; Dylan himself, as well as Joan Baez, came to Donovan's defense, but unfortunately, he seems unable to ever live it down. Perhaps spurred on by this snag on his path, Donovan reinvented himself for the first time with his 1966 album Sunshine Superman, codifying (if not serving as the Trope Maker) parts of the framework of the new-fangled "psychedelic" music that would explode into the mainstream shortly thereafter.

Donovan continued to release seminal works throughout the '60s — albeit returning to his more humble musical roots as psychedelia grew farther and farther away from his own sensibilities — in his own unique style, exploring genres such as jazz, blues, and calypso along the way. Notably, he was part of the famed group of artists that traveled to India to learn transcendental meditation from Maharishi Mahesh Yogi; among them all four Beatles, Prudence Farrow, and Mike Love of The Beach Boys. During his stay, Donovan would pass on his finger-picking style to Paul McCartney and John Lennon, which the two used to write songs that would end up on what would be known as The White Album.

Come the wane of the flower power movement at the close of the '60s did Donovan's own popularity share much the same fate, his chart success gradually dwindling until the mid-'70s when he stopped charting altogether. He would—and still does—retain a sizeable following and status as an Ensemble Dark Horse cult hero, continuing to tour the world and experimenting with new songs, ideas, and sounds. His autobiography The Hurdy-Gurdy Man reveals the path of his life and art in intriguing detail.

As of 2020, he and his wife Linda have begun a project called Eco-Song

, dedicated to environmental activist Greta Thunberg and the Fridays For Future

movement. It's a collection of 21 songs on this subject from across his career; and it will also be a stage musical, to be performed by children and young adults worldwide.

He is also the father of American actors Donovan Leitch, Jr. and Ione Skye.

Futurama parodies Donovan's song "Atlantis", for their bit on the history of Atlanta, featuring Donovan himself.

Futurama parodies Donovan's song "Atlantis", for their bit on the history of Atlanta, featuring Donovan himself.