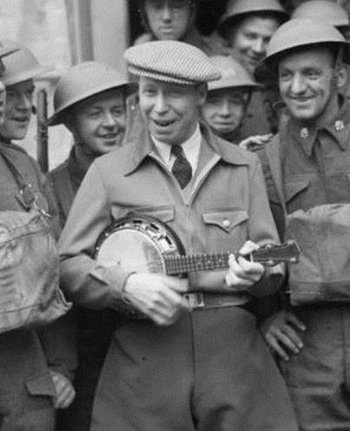 George Formby with the British Army in France, 1940
Now I go cleanin' windows, to earn an honest bob,
For a nosy parker it's an interestin' job!
Now it's a job that just suits me,
A window cleaner you would be,
If you can see what I can see,
When I'm cleanin' windows!
— "When I'm Cleaning Windows"
Advertisement:

George Formby OBE (born George Hoy Booth, 26 May 1904 – 6 March 1961) was a Lancastrian singer-songwriter, comedian and film star who had his biggest hits in The '30s. He often mixed comedy into his songs together with a healthy dose of innuendo. His signature musical instrument was the ukulele, or 'uke' for short.

Formby started out as a music hall performer using the same songs and jokes as his father (also a music hall performer). This changed in 1923 when he married fellow-performer Beryl Ingham, who became his manager and transformed his act by introducing the ukulele to his performance and insisting he dress smartly while on stage. He himself later noted the effectiveness of the latter with regards to his famously suggestive lyrics: "You know, some of the songs are a bit near. But they'll take them from me in evening dress; they wouldn't take them if I wore baggy pants and rednose".

Between 1937 and 1942, he was -— in terms of UK box office takings -— the most successful British cinema actor bar none. In his films, he always played a good-natured working-class underdog who overcomes the odds and invariably gets the girl.

He was one of the most popular British entertainers of his day; it was estimated that during World War II he performed in front of more than three million people. His career declined after the war although he continued to appear in variety shows. When not touring, he lived in his native Lancashire (he named his house in Lytham St Anne's "Beryldene" in honour of his wife). After suffering from various health problems in the 1950s, he died relatively young at the age of 56 in 1961.

The next year, The Beatles would rise to prominence; George Harrison was a fan of Formby's and often put references to him in his songs, most notably at the end of the reunion piece "Free as a Bird". Today, his work is championed by Midlands comedian Frank Skinner

, who does a spectacularly good impersonation.

His most famous songs are:

His best-known films are: